2017 will be remembered in the Folly Beach real estate market by shrinking inventory which lead to frustrated buyers and ultimately a seller’s market.  The year started fast and was on a record pace, but about mid-way through the year, (maybe because everyone loves Folly Beach so much they wanted to stay), new properties stopped coming on the market.  During the second half of the year, demand was still present and buyers were growing frustrated with their selection of homes on the market.  Some settled on a less than desired property and some just decided to wait it out.  When a quality property became available, it would more than likely have multiple offers in the first few days on the market.  As you can see in the chart, there was about the same number of homes sold as 2016, but it was a tale of two halves of the year, as the market started strong and finished flat.  This is good news for sellers as there is demand still out there for quality homes.

There was a big gain in the number of Folly Beach condominiums sold in 2017.  Total sales were up 27% and the average price rose to over $470,000.  Condominiums across the bridge in Mariners Cay and Turn of River could be bought in the $300,000’s but the lowest priced condominium on the island sold for $420,000.  There was a big push by the new development Preserve at Clam Farm which added a bunch of new construction sales to the total.  A few oceanfront condominiums sold in the $700,000’s and there were 3 Charleston Oceanfront Villa sales last year with the highest reaching $990,000.

The number of vacant lot sales saw a big decline in 2017.  Mostly due to a lack of inventory.  There was a bunch of interior lots sold in Sunset Point last year with prices ranging $260,000-$300,000.  An oceanfront lot averaged around $1 million last year.  The oceanfront lot sales were widely varied depending on location, size, and protection.  This is a good example of why you need a Folly Beach expert when selecting your homesite.

2017 Folly Beach Sales by the numbers

Taking a look at the charts below, you can see how from year to year more properties are changing hands at higher price points.  Where the bulk of sales used to be in the 400’s, it has now moved into the 500’s, and this is a great representation of rising prices. 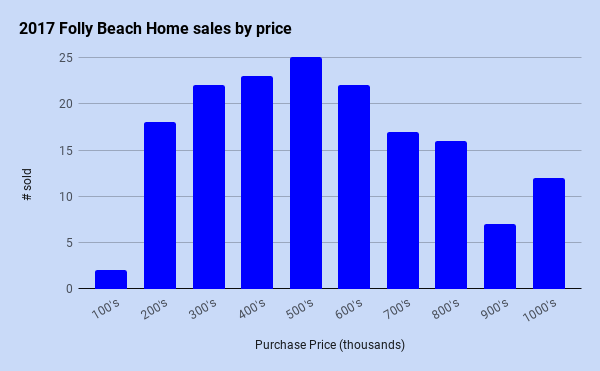 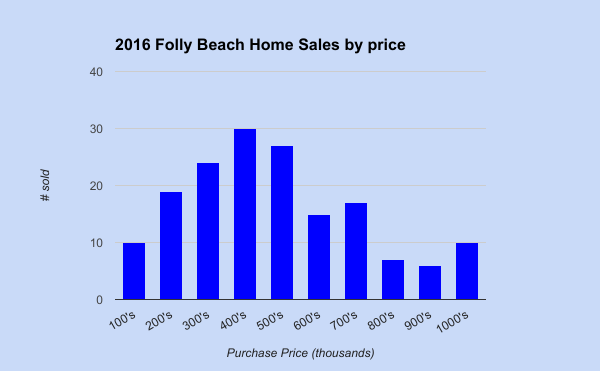 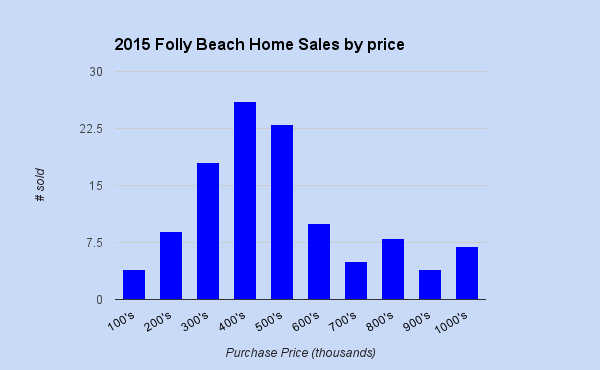